By Hadi Albahra – Co-Chair of the Constitutional Committee

Today, the world commemorates the International Day of Victims of Enforced Disappearance, which is a symbolic day and mere protocols for many countries of the world. For Syrians, it is an ominous day; a day when they remember their loved ones and relatives forcibly disappeared in dark dungeons, prisons and basements run by the Syrian regime. Syrians wait tirelessly for their return to see them, or at least learn whether they are still alive or they have not been swallowed up by the secret mass graves.

In Syria today – according to modest statistics of human rights documentations – there is more than a hundred thousand of forcibly disappeared persons, at least about 90% of whom are forcibly disappeared by the Syrian regime forces. The catastrophic impact of the enforced disappearances affect millions of Syrians, including mothers, fathers, wives, sons and brothers of the disappeared, waiting the return of their loved ones who were kidnapped and disappeared by the Syrian regime and its militias, as well as some uncontrolled gangs and terrorist groups that resulted from the regime’s war on its own people.

Enforced disappearances in Syria are often associated with other violations of basic rights, such as the lack of fair trials, torture, extortion of victims’ families, ill-treatment and humiliation practices, as well as summary executions. The best witness of that practice is the “Caesar photos” which include more than 55 thousand photos leaked early 2014 documenting The killing of thousands of forcibly disappeared persons under torture in the prisons of the Syrian regime, including boys between the ages of 12 and 14, women and old people, some of whom are over 70 years old.

Anyone detained by the Syrian regime may easily and simply turn into a forcibly disappeared person, because law is not upheld upon detention, is not carried out according to judicial warrants, and takes place outside the law, without declaring the reasons for the arrest. Usually, the entity carrying out that arrest is not known and the family of the detainee is not allowed to ask about them, nor does any lawyer have the right to defend them. The authorities find it easy to deny the arrest or detention in its facilities, and the victims are drawn into a labyrinth from which there is no way out.

The fact that the Syrian regime, some armed groups and organizations designated as terrorist groups arrest and hide those who oppose them, including peaceful protesters, human rights defenders, doctors, members of the media, lawyers and humanitarian workers, and subject them to torture and ill-treatment, prevent their relatives from seeing them, and deprive them of trials is an indisputable war crime in the eyes of the international community, which is affirmed by its laws.

According to the International Convention for the Protection of All Persons from Enforced Disappearance, adopted by the United Nations General Assembly on December 23, 2010 in its resolution No. 133/47, there are basic criteria for diagnosing cases of enforced disappearance, which are “arrest, detention, abduction or any other form of deprivation of liberty by agents of the State, or by persons or groups of persons acting with the authorization, support or acquiescence of the State, followed by a refusal to acknowledge the deprivation of liberty or by concealment of the fate or whereabouts of the disappeared person, which place such a person outside the protection of the law.

Also, according to the same convention, “no exceptional circumstance whatsoever, whether a state of war or a threat of war, internal political instability, or any other public emergency, may be invoked as a justification for enforced disappearance.” It strongly calls for investigating acts of enforced disappearance and bring those responsible to justice.

This inhumane issue is not the result of the last ten years. The Syrian regime has a long history of systematic enforced disappearance, since the emergency law was imposed in 1963, when nearly 20,000 Syrian citizens disappeared in the 1980s, most of whom were from the city of Hama. Additionally, an unknown number of Syrians, Palestinians and Lebanese disappeared in Palmyra prison and other prisons, and in the past ten years, following the peaceful protests that erupted in March 2011, a huge number of Syrians forcibly disappeared without a trace; the fate of all of them is still unknown despite all the demands and international resolutions.

Since it is an issue that irritates the regime and condemns it, because of its volume, dimensions and inhumane nature, which will subject the regime to accountability, the regime refused to positively deal with it. The regime believes that the issues of detainees and enforced disappearances are bargaining chips and leverage that it can use in the political talks. But the regime, of course, is completely mistaken. These issues are humanitarian, national, human rights and non-negotiable matters that should not wait reaching a political solution, but rather precede it, in accordance with the resolutions and recommendations of the 2012 Geneva Conference, and the UNSC Resolution 2254 of 2015, which focused on the issue of detainees and forcibly disappeared persons due to its gravity. It has been included in the forefront of the necessary confidence-building measures that precede and pave the way for a package of items for a political solution in Syria.

There are plenty of UN resolutions and international condemnations that demanded the release of Syrians who are being held illegally, and the disclosure of the fate of the forcibly disappeared. However, no action was taken to stop the bleeding resulting from this file, and to hold the perpetrators, those involved and the murderers accountable, although enforced disappearance is a serious issue for the political negotiations and a mandatory prelude that paves the way for a political solution, and an indispensable necessity for achieving transitional justice.

The file of the forcibly disappeared is one of the most complex and tragic files. According to the United Nations’ description, it is a “national trauma” that affected the lives of millions of Syrian families of the disappeared and detainees. There are parties that are working relentlessly to document the cases of enforced disappearance, including Syrian and international human rights organizations, as well as the forces of revolution and opposition, which demand in all fora the establishment of a special tribunal for war crimes and crimes against humanity perpetrated in Syria to prosecute the executioners for their crimes. Amnesty International, the Independent International Commission of Inquiry call for trying crimes perpetrated in Syria, and the International Committee of the Red Cross also tries to play a key role in the release of detainees, among others, despite how difficult, complex and arduous this process may be. Syrians from all walks of life, including politicians, human rights defenders, members of the media, and the forces of freedom and peace, will continue tirelessly seeking to keep this issue under the light, and urging the international community, the United Nations, the UN Security Council and the High Commissioner for Human Rights to put pressure on the Syrian regime and its allies in order to reveal the fate of the forcibly disappeared, empty prisons and detention centers of the innocent, and advance a political solution based on UNSCR 2254 (2015).

Reaching a durable political solution in Syria is impossible without releasing detainees, knowing the fate of the forcibly disappeared and mission persons, and later laying the legal ground that paves the way for prosecuting and holding perpetrators and criminals accountable for what they have done against tens of thousands of Syrians who have been forcibly disappeared.

Syrians will never accept that those who killed and made their loved ones disappear in prisonse survive and remain in power. Rights shall be restituted as long as right owners keep demanding that, and rights cannot be lost due to the passage of time. Justice will be served, sooner or later, and the tears of hundreds of thousands of mothers will not be merciful and will chase criminals even in their dreams, until justice and retribution are achieved.

Pedersen: In Astana, I appealed to the guarantors to support my call for the Constitutional Committee to meet in Geneva in January

Pedersen: The Russian Federation raised issues over the venue of the Constitutional Committee meetings. These issues were comprehensively addressed

Pedersen: I am concerned that the Constitutional Committee has not met for six months 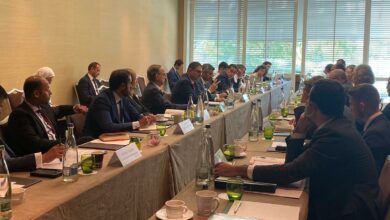