Syria is considered one of the most dangerous countries for journalists

Where they are exposed to grave dangers while carrying out their peaceful work and covering the war waged by the regime against the rebellious people to gain their freedom and their human and legal rights.

Most of the serious violations against journalists are committed by government institutions and extremist militias.

The upcoming constitution stresses the importance of free media and the right to express opinion, including the right to peaceful protest and sit-in, and that no society can be free and just without journalists capable of investigating violations and providing information. To citizens, reveal the truth.

Day of Remembrance for all Victims of Chemical Warfare

International Day for the Elimination of Violence against Women 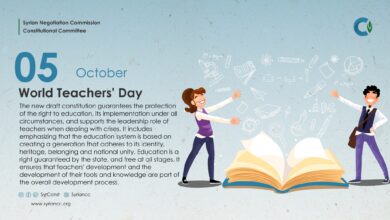