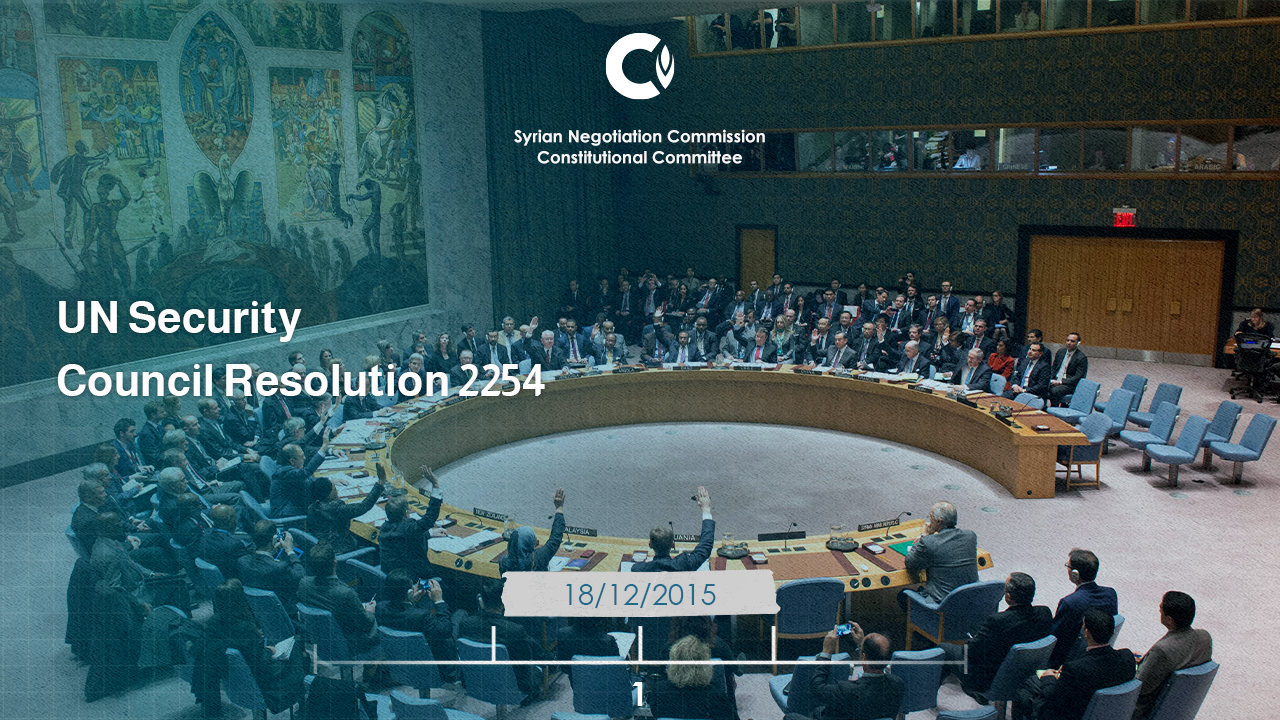 UN Security Council Resolution 2245, adopted unanimously, considers the work of the Constitutional Committee to draft a new constitution for Syria as a contribution to the political settlement of Syria. The resolution relied on Geneva Communique, and supported the Vienna Communiques on Syria, as the basic ground for achieving the political transition process and ending the conflict. 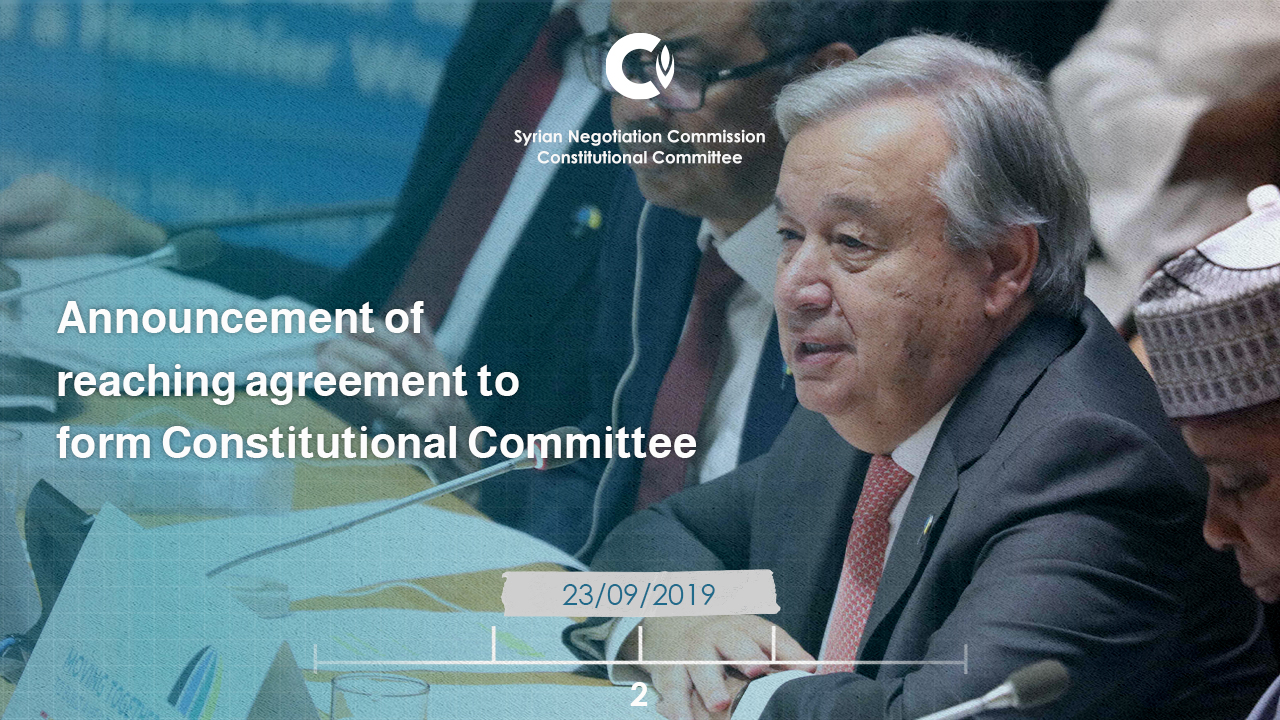 The UN Secretary-General, Antonio Guterres, announced that an agreement had been reached regarding the formation of the Syrian Constitutional Committee, comprising representatives of the opposition, the Syrian regime and civil society, to draft a new constitution with the aim of reaching a political solution in Syria. It includes 150 members, fifty for each of the three parties. 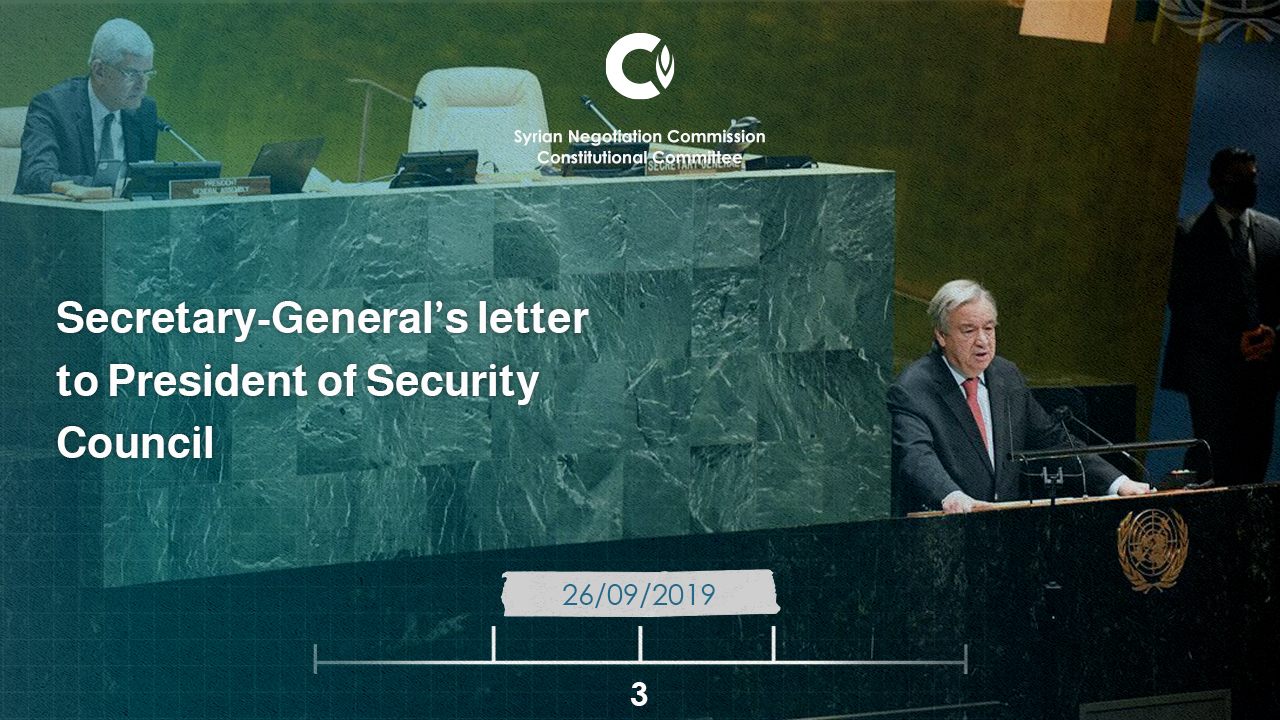 Adoption of the document (No. 775 of 2019) addressed by the United Nations General Security to the President of the Security Council, on the terms of the reference standards and core rules of the internal regulations of a Syrian-led, Syrian owned, credible, balanced and inclusive constitutional committee, facilitated by the United Nations in Geneva. 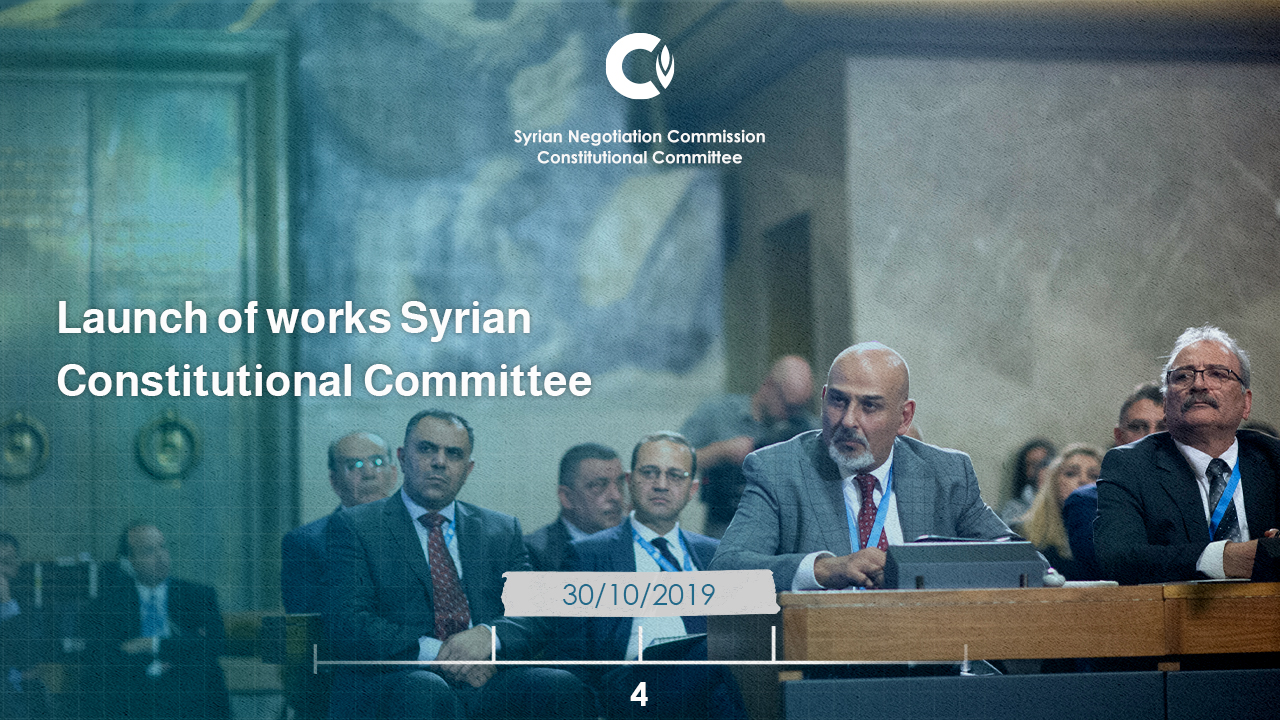 Facilitation by the United Nations. works of the Syrian Constitutional Committee Kicked off at the United Nations Palace in Geneva, Switzerland. The launch of the works received broad international and Arab support. 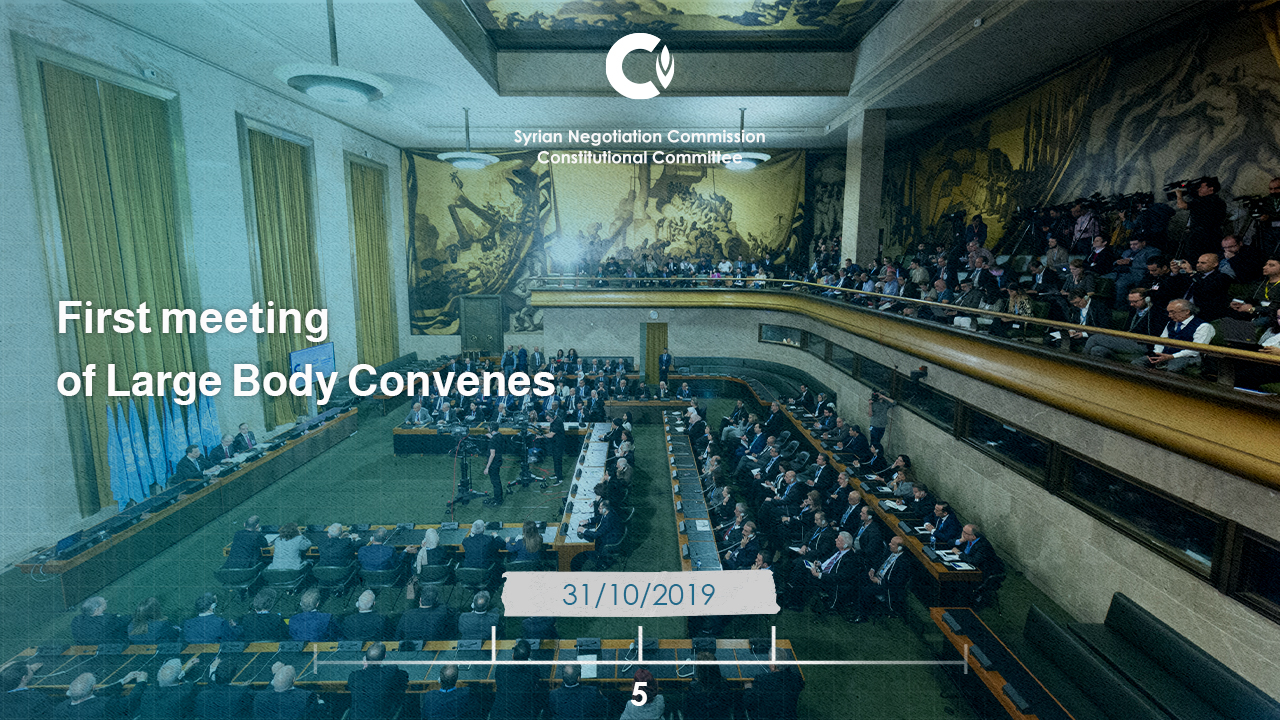 The Large Body, consisting of 150 members, held its first meeting with the presence of all members from the three delegations, in working sessions chaired by the two Co-Chairs. 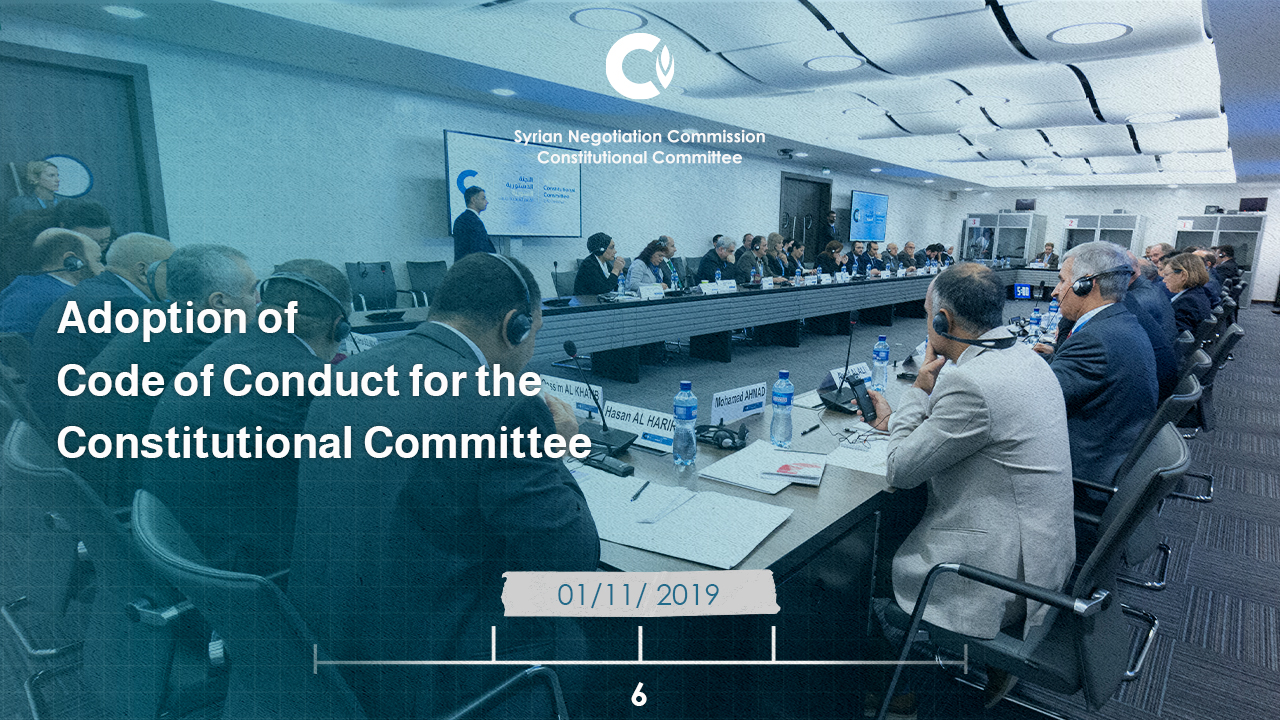 Adoption of Code of Conduct for the Constitutional Committee 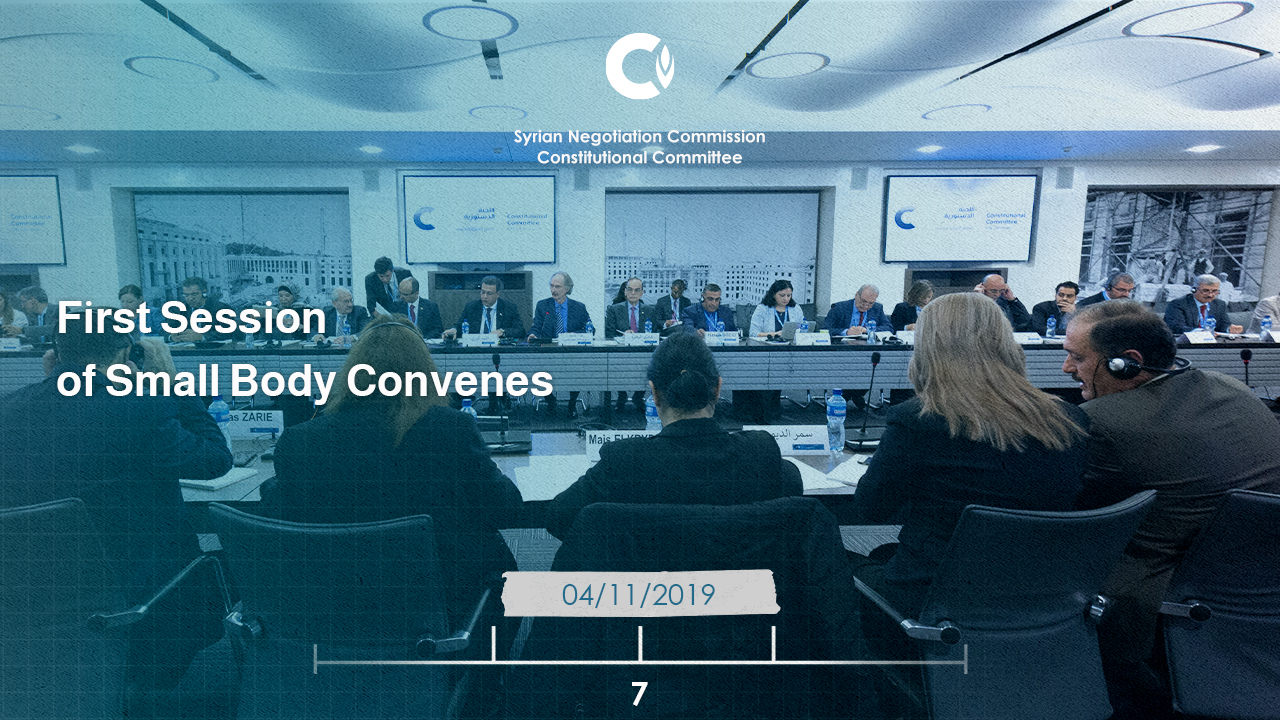 Members of the Small Body (the Drafting Committee) consisting of 45 members, convened meetings over five days. The first session focused on protocol procedures related to the working mechanisms of the Constitutional Committee. 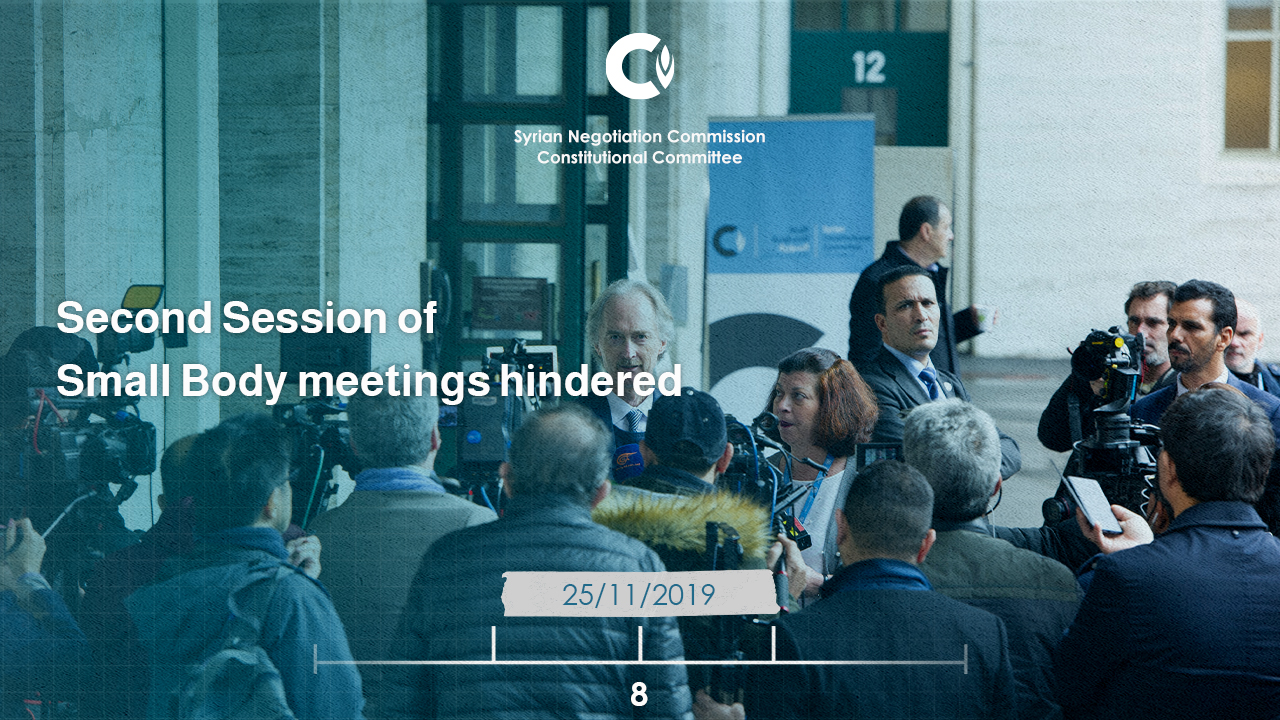 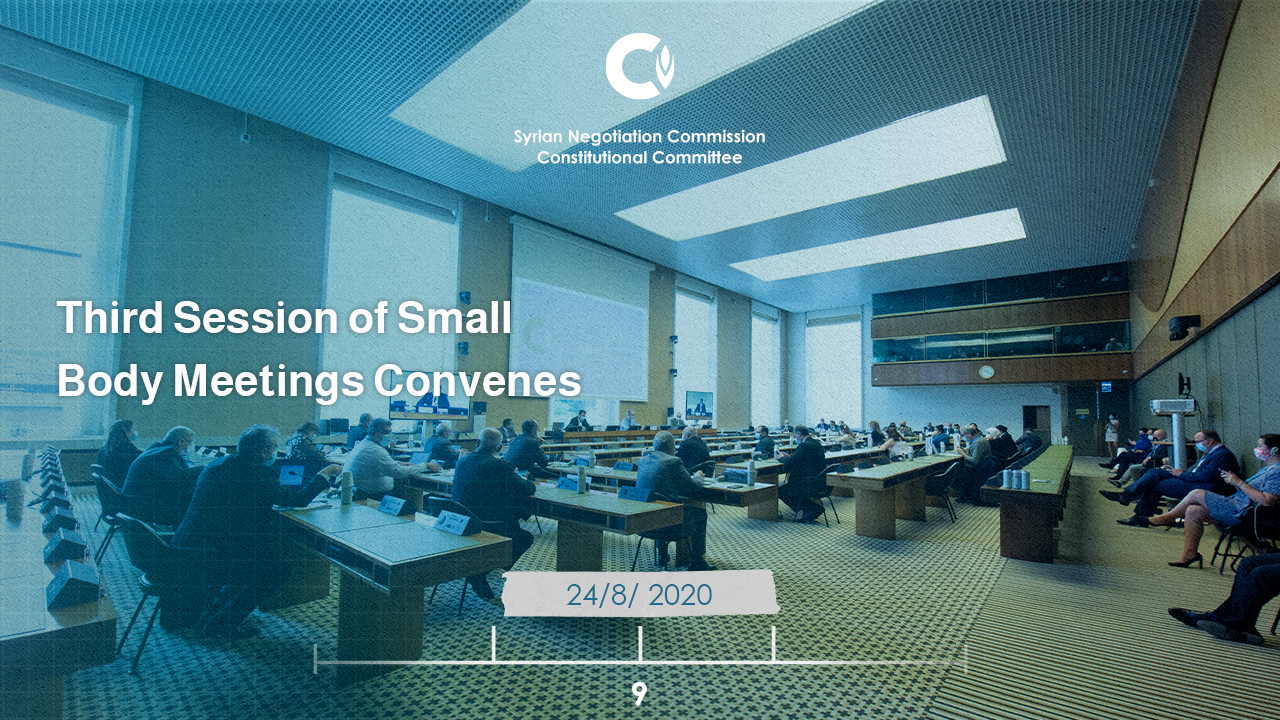 The Small Body (Drafting Committee) convenes to discuss the “Based on the Constitutional Committee’s mandate, terms of reference and core rules of procedures “national foundations and principles”, but the committee’s meetings were suspended due to the effects of the “Corona” pandemic. 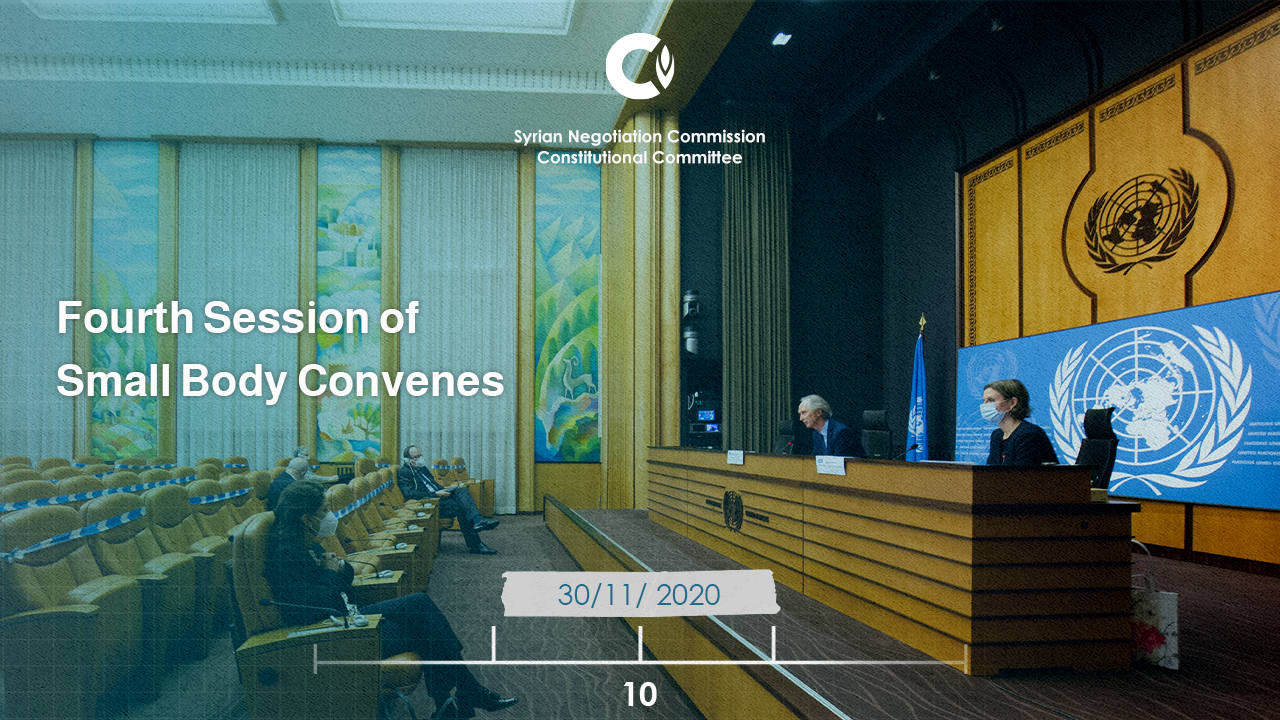 The fourth session of the Constitutional Committee meetings was held at the United Nations headquarters in Geneva, Switzerland. The Small Body (consisting of 45 members), continued the discussing the agenda of the third session “national foundations and principles”, according to the authorize the Syrian Constitutional Committee and its procedural rules. 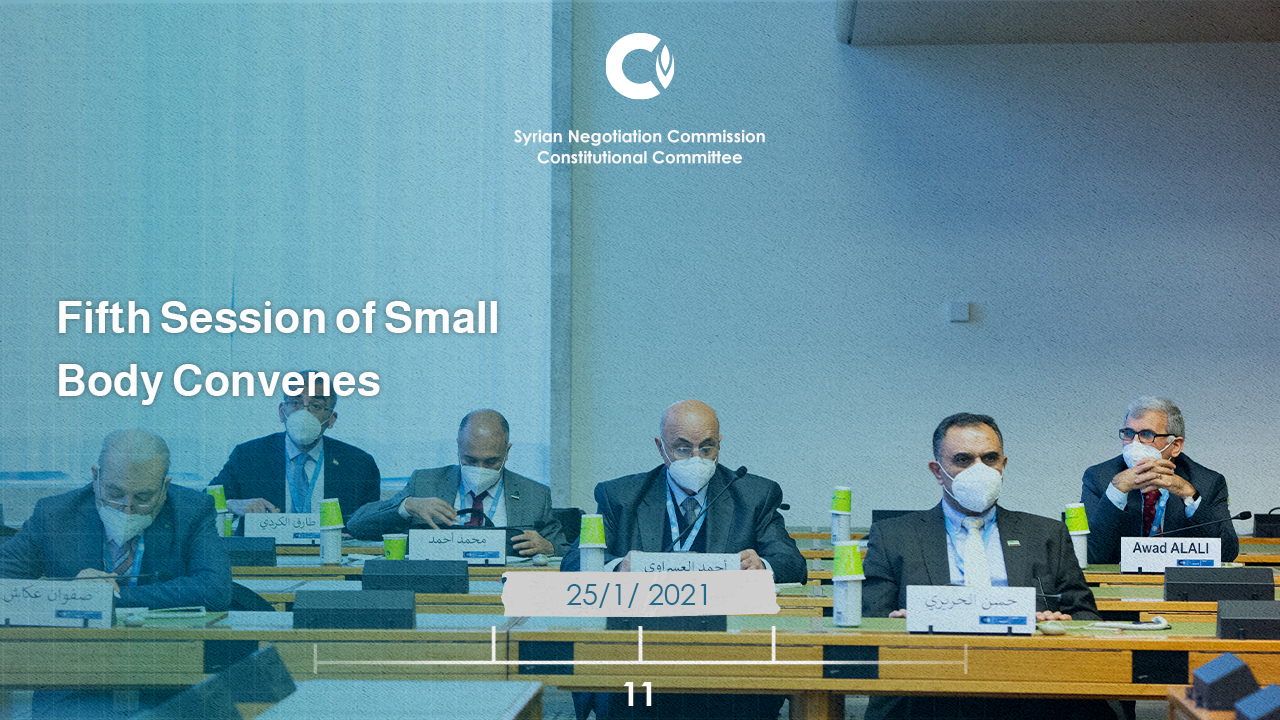 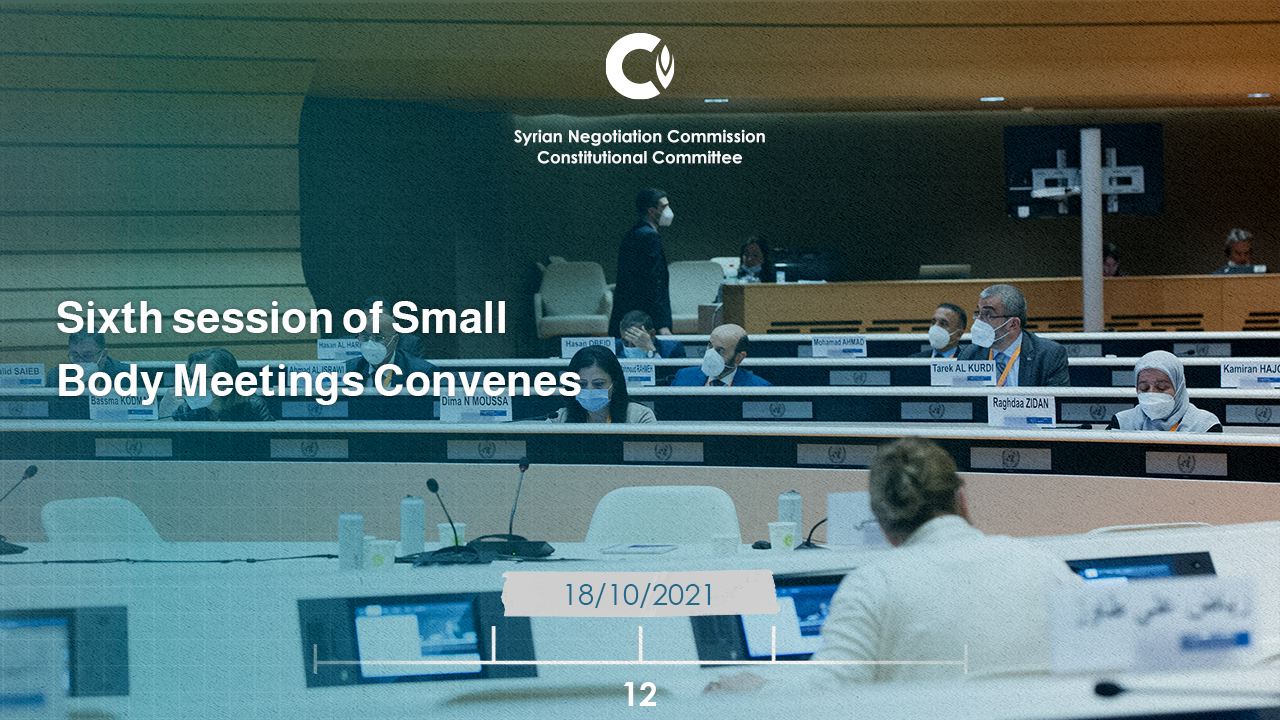 The sixth session convened after reaching an agreement on the methodology. The agenda, which was attended by the 45-member Small Body, included the discussion of four constitutional principles: (State Sovereignty, Security, The Army and the Armed Forces, The Rule of Law, and Combating Terrorism and Extremism). 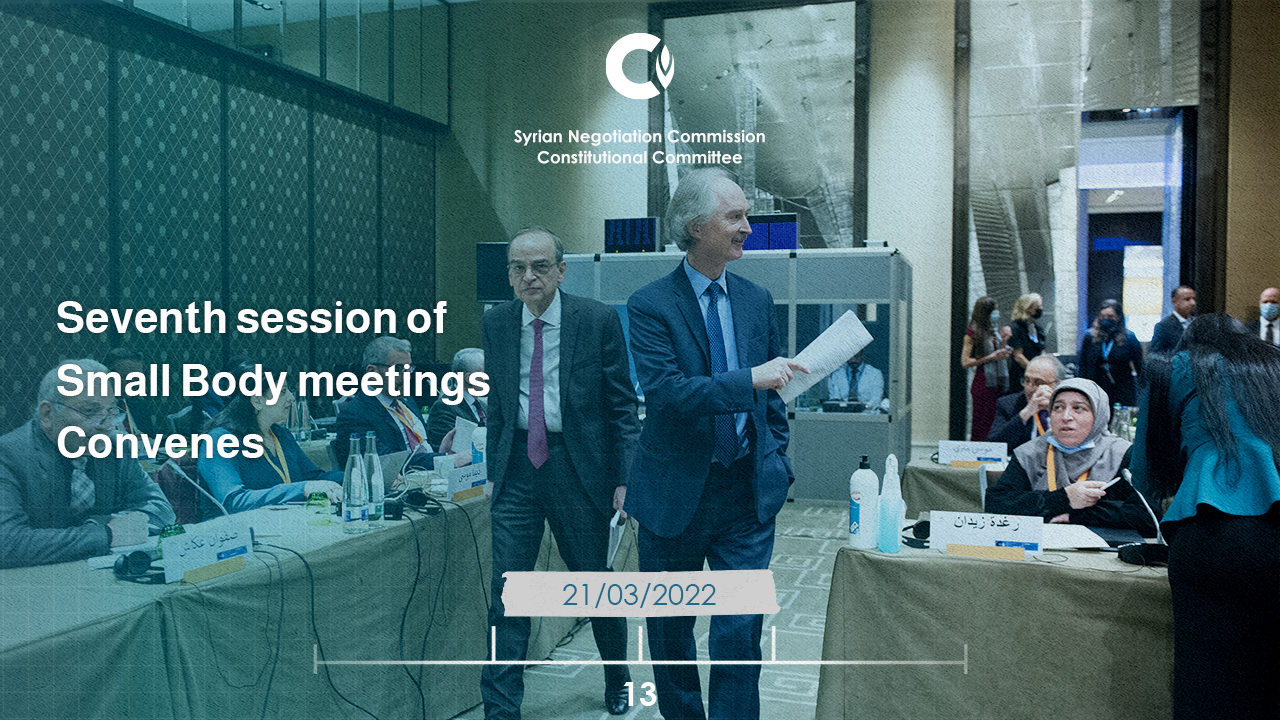 The seventh session of the Small Body convenes in Geneva, The following constitutional principles were discussed: (Basics of Governance, State Identity, State Symbols, Organization and Function of Public Authorities). 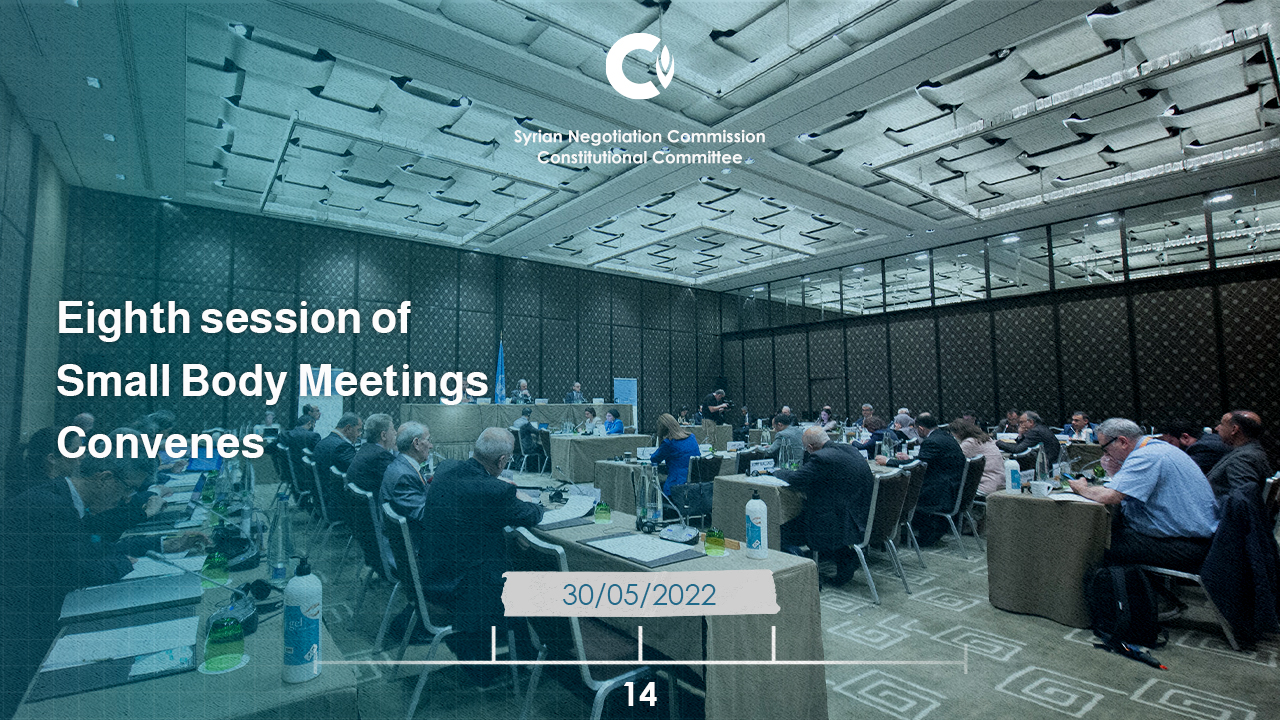 The eighth session of the Small Body convenes in Geneva. The following constitutional principles were discussed: (Maintaining and Strengthening State’s institutions, Unilateral coercive measures from a constitutional standpoint, The supremacy of the Constitution and the position of international treaties, Transitional Justice). 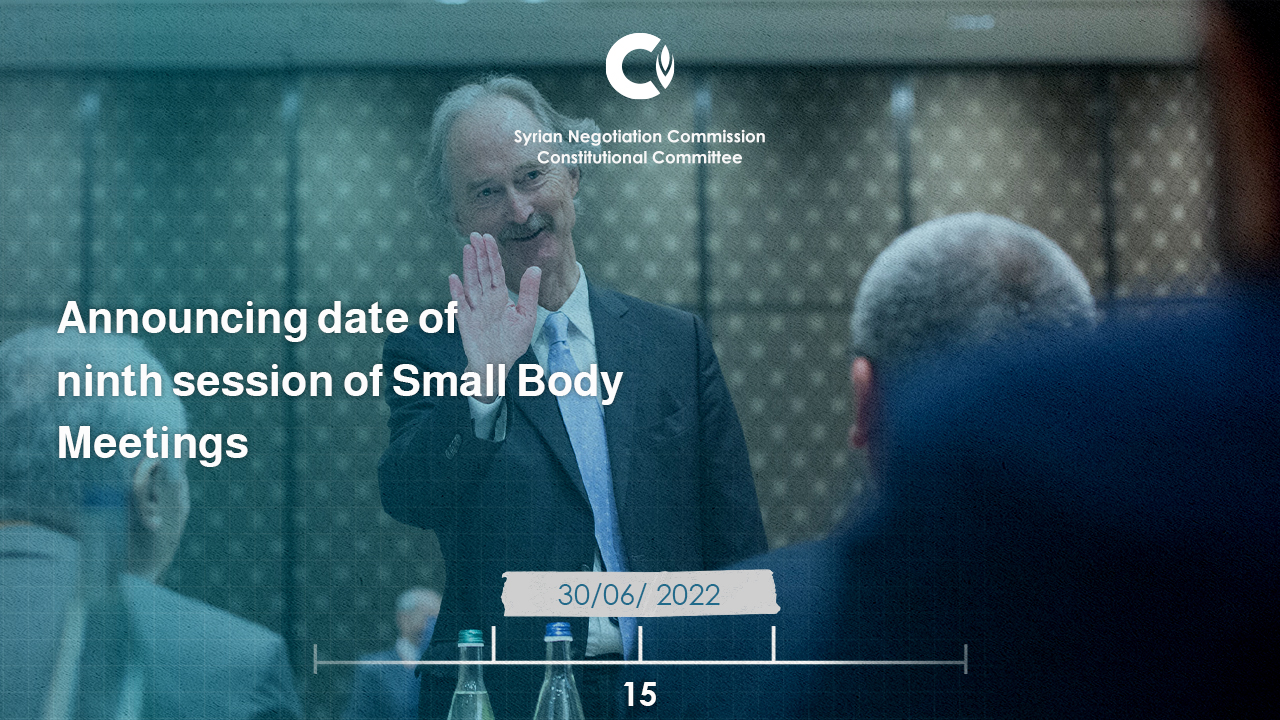 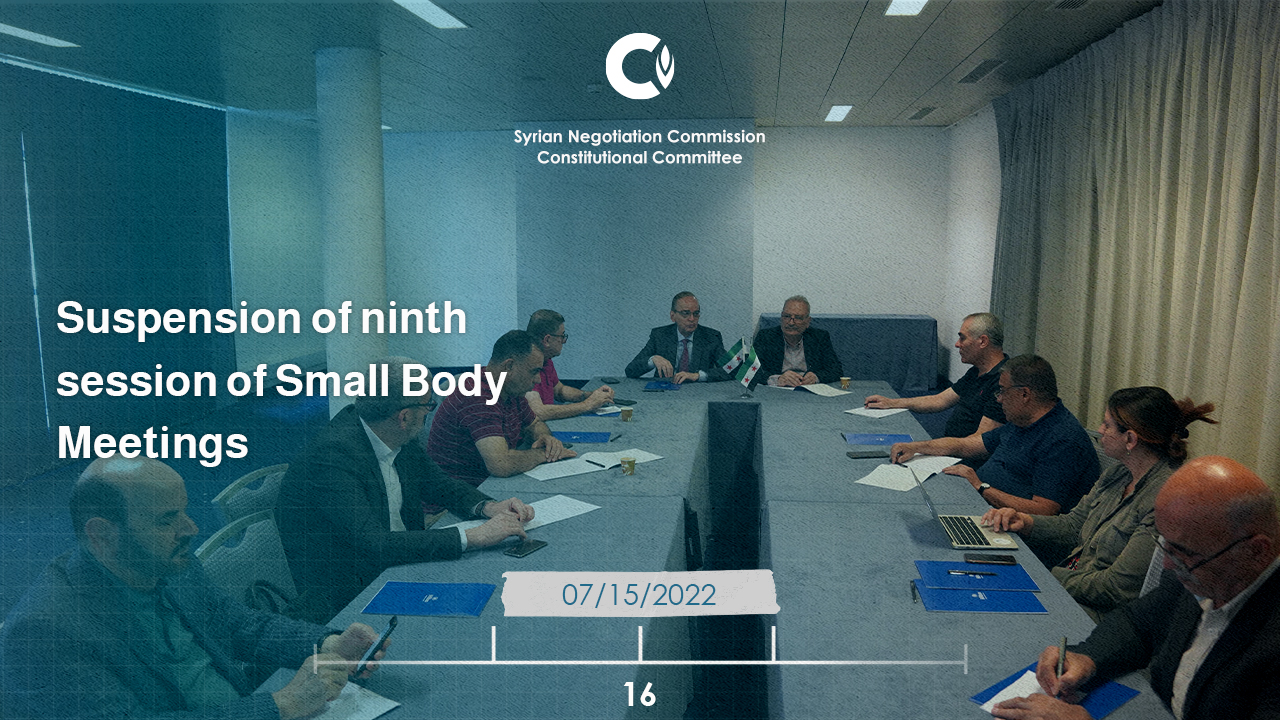 The United Nations Special Envoy to Syria announced the postponement of the ninth session of the Constitutional Committee meetings to an unspecified date. What he described as requests from the Russian Federation.

Resolution 66/253. The situation in the Syrian Arab Republic

to receive the latest news and updates about the work of the SNC delegation in the constitution committee.

Back to top button
Close
الأكثر مشاهدة
الأكثر تعليقا
آخر التعليقات
Manage Cookie Consent
To provide the best experiences, we use technologies like cookies to store and/or access device information. Consenting to these technologies will allow us to process data such as browsing behavior or unique IDs on this site. Not consenting or withdrawing consent, may adversely affect certain features and functions.
Manage options Manage services Manage vendors Read more about these purposes
View preferences
{title} {title} {title}
Close